Sign In
Home
Dr. Mohammad-Amini: If the translator can expand the area of a concept, he has helped thinking in that language 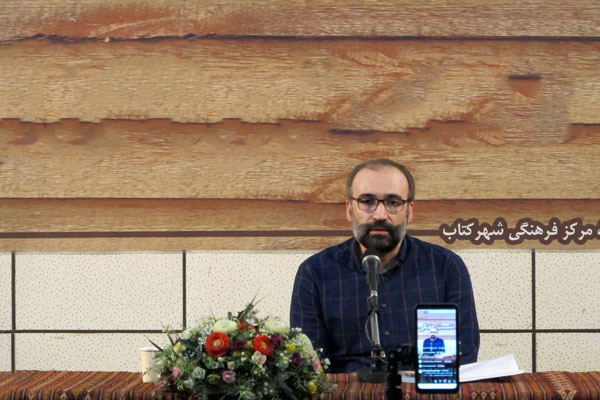 Dr. Meisam Mohammad-Amini in an interview with Public Relations Office:
If the translator can expand the area of a concept, he has helped thinking in that language.

Dr. Meisam Mohammad-Amini is an assistant professor at Shahid Beheshti University's Institute of Medical Science and Technology. He has a PhD in philosophy of science. He has been translating many works in the field of philosophy for many years, among which we can mention the Persian translation of “Philosophy of language: a contemporary introduction” by William G Lycan. Below you will read part of our interview with Dr. Mohammad-Amini.

•    We are at your service at the Research Institute for Fundamental Studies of Science and Technology. It seems that a few students have heard the name of this research institute, or they don't have detailed information about it. Would you please talk a little about the research institute, its importance and the special work it has defined for itself.
The Institute of Medical Science and Technology was officially established at the end of 1992, during the period when Dr. Tehranchi was the president of the university. I can say that there is an ambitious idea behind this research institute, which we have tried to achieve despite all the shortcomings and problems. The field of governance and policy-making is divided into different sectors, such as education, health, environment, etc. A very important part of governance is the related to the field of science and technology. Historically, it is said that World War II and the use of nuclear weapons was the turning point that almost all governments realized the importance of science and technology. In the last few decades, this has become more prominent and science and technology policymaking has become a fundamental issue. There are many complications in this space. Many factors should be considered for policy making in this field. We need someone who has political skills and is familiar with politics and on the other hand has a good understanding of science and technology. Our research institute was formed with the idea that a fundamental understanding of science and technology in fields such as philosophy of science, sociology, and economics should be combined with managerial and policy-making skills so that in the long run we can create successful models for science and technology policymaking in the country. In our institute, five faculty members have studied philosophy of science and technology; one person is a sociologist of science, and the other four people are active in the field of science policy-making (from the field of technology management and management). From one point of view, philosophy and management may seem to be very distant fields, but from one point of view, the philosophy of science and technology should cooperate with management so that we can benefit from fundamental insights in practice. For example, consider issues such as global warming and climate change (especially during Trump's presidency, when he withdrew from the Paris Agreement, and then they returned to the agreement, and now the Republicans say they intend to withdraw from it). We are also a member of this agreement and some say why we should have accepted this document. There is one main issue behind all these media fights and that is "Is the climate really changing?" This is a scientific issue and we should ask scientists about it. When we enter the field of science, we encounter a crowded field because it depends on the interests of governments. Some scientists confirm the occurrence of climate change and some do not. Credible scientists overtly and covertly defend the "radiation theory" according to which it is the sun's radiation that is warming the earth. Some say that this is a periodic course that we have had on earth in other periods as well. The main question is "Do we have global warming due to human actions or not?" If an official wants to make a policy decision in this matter, he must know how to find out the truth or falsity of this issue in the scientific environment. This requires a deep understanding of the mechanisms of science and the scientific community. Another example is food manipulation. This case has also been disputed in the media. You need to know what the scientific environment is like. This issue has received much attention in recent years in the field known as "Science and Technology Studies". Science and technology studies is a discipline resulting from the interaction of philosophy of science and technology, history of science and technology, economics of science and similar fields. This field sees and analyzes science and technology more in the context of society. In the field of science and technology studies, we see that the reality of scientific activity is very different from what non-specialists know about science. The public opinion is that scientific theories are based on clear experimental observations and very precise rules, and it is not like art or religion in which there is a huge difference of opinion, and if there is a difference of opinion, we go to the laboratory and reach an agreement. But the reality of science is not like that. That form of fateful experiment that philosophers of science once believed in is not seen at all in scientific reality. There are many disagreements in different fields of science. Sociologists of science have theorized why scientists hide these differences from the public, noting that there are goals at play mainly related to power, social prestige, access to financial resources, and the like. Understanding science and technology requires careful attention to these details. I may have this view as an expert in the philosophy of science and technology, but this view does not reach the decision-making level, while it should be considered in policy-making. Establishing this relationship and bringing knowledge to the decision-making level requires the formation of interdisciplinary studies and institutions that operate in this field. Another case is about intellectual property, which is an administrative-executive discussion, but its root basically goes back to ethics and moral philosophy. Building this bridge and connection is very difficult, but quite necessary.

•    What is the relationship between thinking and translation in your opinion? Mr. Farhadpour states that translation, in the broadest sense of the word, is the only form of thinking for us. what is your opinion?
When we talk about translation and translator, we are faced with a loose word that covers a wide range of concepts. We should contemplate on Mr. Farhadpour’s statement. What he means by translation is a kind of cultural import. In the philosophy of mind, we have an important theory that says the mind is a computer, that is, a calculating machine, and thinking is calculating. Of course, the calculation here is not limited to mathematical calculations and the meaning of the calculation is the manipulation of symbols based on syntactic features. It is said that thoughts and ideas can be considered symbols on which the brain performs calculations. It combines them together in different ways and brings out other things. The thinking process is similar to what a computer does. In machine translation, exactly the same thing happens and a symbol string in English becomes a symbol string in Farsi. This explains the situation to a large extent at the level of syntax and the connection between the symbols themselves, but it does not explain the connection of these symbols with the outside world. Artificial intelligence systems such as Google Assistant, which can be spoken to and are so-called intelligent, also work in the same way. If you ask them some information, such as where the capital of a certain country is, or where the next Olympics will be held, they will answer quickly and accurately. But if you ask them which color they like or how many friends they have, they may face a problem. If we consider translation a broader concept and consider its original meaning, it is close to thinking and expanding the area of concepts. In the philosophy of language and the theory of meaning, we have two general approaches that actually correspond to the two main functions of language. One approach influenced by classical theories that starts from the time of Locke and Hume and reaches Russell and Frege, who are the pioneers of analytical philosophy, emphasize the referential function of language. This group believes that the meaning of words and symbols is derived from their relationship with the outside world. Accordingly, the book is what we put in the corner and the table is what is in front of us. The language of science is largely referential. Science talks about the outside world and the meaning of words comes out of that referential relationship. In contrast, the other approach heavily influenced by the later works of Wittgenstein emphasizes application. Based on this, words find their meanings from the usages and relationships they have with each other. When we use language, we are playing different language games, and language expressions are our tools in these games. For example, "Hello" is the card I play in the greeting game when I see you. I say hello and you answer me. This word does not have a referential meaning, but occur in a situation where two people see each other and greet each other. When we look at this function of language, we realize that such words find their meanings in relation to each other. If I want to explain to you what "force" is in physics, I should explain "distance", "time", "velocity", "acceleration" and "mass" so that I can finally reach "force". This is the conceptual system that gives meaning to "force". Of course, "force" also refers to something in the outside world, and we can see what force is in the laboratory. So, the meaning is largely based on the function and the conceptual network, and it depends on where words are located in this network. I can tell you that I know the meaning of north and south, because if I say "Tehran is in the north and Ghom is in the south", I can conclude that "Qom is also in the south of Tehran". The main part of this problem is that I can move between these concepts to see what concepts can be concluded from each concept. Compare this with talking birds. A parrot can say the words, but it cannot discover the connection between them. Thinking and understanding is largely based on this issue. If the translator can expand the area of a concept, he has helped thinking in that language. This can be tested in terms of how much a translated text has caused secondary texts to be written in the target language, from student researches to scientific and research articles as well as criticisms. There are authored books that are written by using translations. If we are looking for authentic humanities, we must measure the quality of work in this regard. Translation is very important here and it shows itself in expanding the conceptual framework of our language. Nowadays, many people who refer to Kant either translate themselves or use other translations. So, it can be said that Mr. Farhadpour's statement about translation in its broadest sense is not devoid of truth. However, he uses exaggeration to express his point.