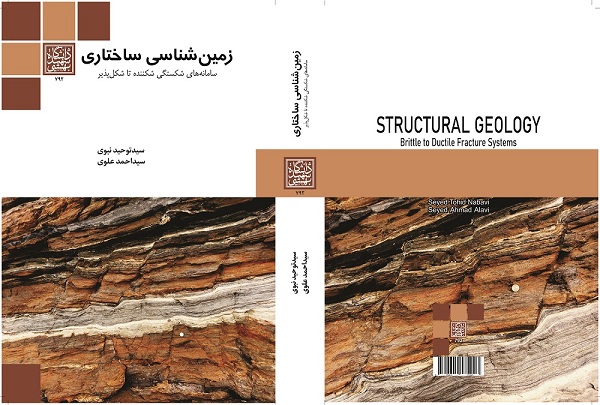 The book Structural Geology: Brittle to Ductile Fracture Systems, written by Dr. Seyed Tohid Nabavi and Dr. Seyed Ahmad Alavi, professor of the Faculty of Earth Sciences of SBU, has been published recently by SBU Press in 882 pages.

Structural geology is the study of brittle to ductile fracture systems for the geometric, kinetic, and mechanical understanding of their onset, expansion, distribution, and evolution at various scales through various methods. Much of the deformation of rocks is controlled in response to tectonic stresses caused by environmental conditions, physical properties of rocks, and many other geological parameters. The processes involved in rock deformation can be observed, depending on various mechanisms, at different scales from crystalline creeps, fluid flows and micro cracks to tectonic faults, which indicate the wide range of structural geological research fields.

The book has been written in ten chapters, including joints and veins, faults and its parameters, classification of faults, shear zones, normal, inverted and strike-slip fault systems, fault-related folds, stress and strain, and the mechanics of fractures and faults. The authors of the book have attempted to include new and advanced structural fields that have a special value and position in line with current research in all sections, in addition to the educational fields of structural geology. Also, due to the continuity of the fields of structural geology (microscopic to regional scales) and tectonics (regional to global scales), geological structures have been studied at different scales in all sections, because the analysis of structure in one scale always contains illuminations for other scales.