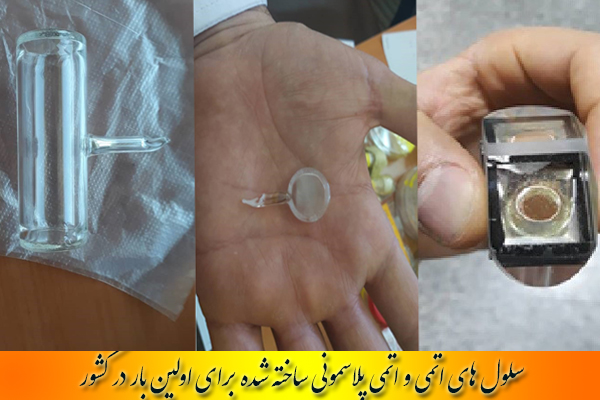 ​Atomic and atomic-plasmonic cells, as cores of highly sensitive sensors, were designed and manufactured for the first time in Iran and the Middle East, at the Laser and Plasma Research Institute of SBU, with the support of the Photonics, Laser, Advanced Materials and Manufacturing Technologies Development Headquarter.

Among the required parts in the field of sensors and quantum devices is the need to integrate and reduce the lower physical dimensions of these devices. Various solutions have been proposed and developed in the world for this purpose, one of which is the use of nanophotonic capacity in atomic spectroscopy. For example, the use of micron waveguides to conduct light and interact with atomic vapors has been successful. Also, one of the very high-performance cases is the interaction of single atoms with cavity modes. One of the most interesting facilitators of this idea is the use of plasmon modes as a cavity with the ability to easily couple with atomic transitions. Creating atomic coupling with plasmonic cavity mode requires prerequisites such as sufficient knowledge of the types of nanostructures supporting plasmonic modes and the characteristics of plasmonic modes, which must be carefully considered.

It should be noted that a lot of work has been done so far to laser trap and cool the atoms with the help of surface plasmon waves, and this will be promising for the new generation of quantum sensors that characterize highly sensitiveness and small dimensions. There is also a high potential for combining damping modes in nanostructures with atomic transitions, which has been well studied in the Magnetoplasmonics Laboratory at SBU with the support of the Photonics, Laser, Advanced Materials and Manufacturing Technologies Development Headquarter, and the results of the interaction of damping modes with vapor modes have been published in authentic journals. For example, the possibility of super-accurate measurement of damping wave polarization due to overall reflection from the prism surface was successfully demonstrated with the help of atomic spectroscopy.

In general, the steps taken in the Magnetoplasmonics Laboratory in the field of quantum interactions of atoms with waveguide waves and the free space of light can be listed as follows:

1.  Making low-pressure chambers of rubidium atomic vapor with millimeter and micron dimensions, as well as dual chambers with the possibility of quantum coupling of atoms with surface plasmon waveguide or damping mode or other waveguide modes

2. Constructing and working with heaters suitable for atomic vapor spectroscopy for fluorescence and transmission data acquisition

3. Bypassing Doppler dilation with the help of Rubidium microcells

4. Atom pairing with damping wave and damping spectroscopy and investigating the interaction of atom van der Waals with the surface

5. Coupling the quantum discrete level with the continuous level of surface plasmons and creating super-sensitive Fano interference in order to benefit from quantum sensing, including magnetic field sensor