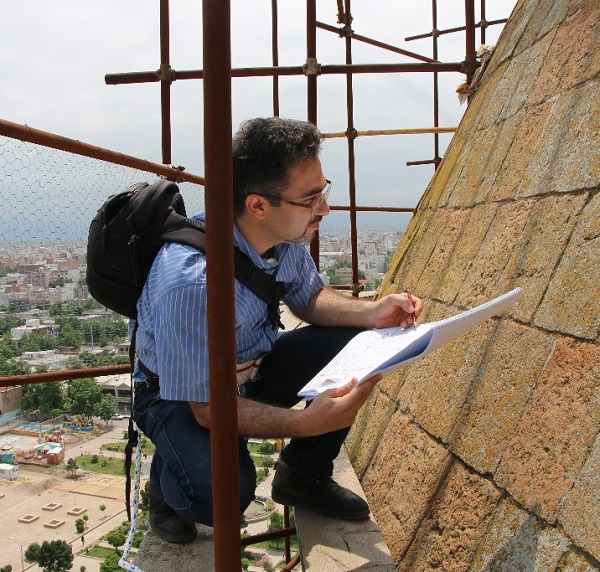 ​The documentation and technical analysis for the restoration project of the conical dome of Gonbad-e Qabus, the tallest brick tower in the world, was carried out by the Faculty of Architecture and Urban Planning of Shahid Beheshti University (SBU).

Dr. Hadi Safaeipour, a faculty member of the Faculty of Architecture and Urban Planning of SBU, and the manager for developing Gonbad-e Qabus restoration project announced this news and added: “With the aim of benefiting more from scientific findings in the field of restoration of historical buildings, a lasting relationship has been established between SBU and Gonbad-e Qabus World Heritage Site since 2018, and the long-term, continuous studies of this valuable monument have begun since then.”

Dr. Safaei stated: “In 2018, the first phase of studies entitled ‘Documentation, Recognition and Analysis of Structural Elements and Construction Techniques of Gonbad-e Qabus’ was performed in one year by the faculty members of SBU in two main parts with a credit of 800 million rials. In the first part, an image of the tower was prepared with close-range photogrammetric, point cloud and three-dimensional mapping methods, and very accurate maps of the tower were drawn accordingly. In the second part, technical information and the course of restoration interventions in the building were recorded by referring to first-hand sources such as historical images, historical documents and restoration reports. Thus, a comprehensive database was prepared before deciding and taking action for any kind of intervention in the building. Subsequently, since April 2021, SBU has been entrusted with the preparation of a comprehensive plan to repair the outer shell of the conical dome and the construction of a sample of bricks and mortar to repair the damaged parts. With a budget of 3 billion rials, this project was defined in the form of a research contract between SBU and the Cultural Heritage, Tourism, and Handicrafts Department of Golestan province.”

The faculty member of the Faculty of Architecture and Urban Planning of SBU added: “Documentation and technical analysis of the outer shell of the dome ​has been done since the conclusion of the contract. For documentation, the orthophoto images of the dome were processed; the technical documents of the dome were drawn accordingly; and previous repairs and interventions were identified and periodized. Based on this information, the technical analysis was conducted in two parts. In the first part, the dimensions, geometry and arrangement of the bricks of the outer shell of the dome, as well as the techniques of making the outer shell were identified and represented using two-dimensional drawing documents and three-dimensional modeling. In the second part, to complete the technical analysis, thin sections of the brick body and mortar of the outer shell were sampled in order to recognize the applied materials. These samples have been sent for laboratory studies such as petrography, XRD and XRF analyzes, brick physical properties test, frost-thaw resistance test, salt crystallization resistance test, Scanning Electron Microscopy (SEM) and Energy Dispersive X-Ray (EDX) analyses, and simultaneous thermal analysis. In the next stage, the pathology of the dome will be performed based on the obtained information.”

Gonbad-e Qabus tower is the tomb of Qabus ibn Wushmagir and a remnant of the fourth century AH. It is built on a dirt hill in the center of the Iranian city of Gonbad-e Kavous. This historical monument was registered in the list of Iranian cultural heritage works with the number 86 in 1310 (solar year), and it was also included in the list of UNESCO heritage sites in 2012.