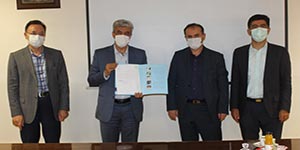 The official license for holding the Test of Russian as a Foreign Language (TORFL) was granted to Shahid Beheshti University (SBU).

Dr. Parvar, representative of the National Organization for Educational Testing visited Ekbatan Campus and granted the official license to hold TORFL to SBU. SBU is the first and only university in Iran that has obtained this license.

TORFL is a contemporary test of Russian language for foreign citizens compliant with the best European quality standards. Levels of the Test of Russian as a Foreign Language are matched to the Common Europ​ean Framework of Reference for Languages: Learning, Teaching, Assessment (CEFR).

Usually the exam is held over a period of 2 days. On the first day candidates take the "Writing", "Vocabulary/Grammar" and "Reading" parts, on the second day – "Listening" and "Speaking" parts. The TORFL test assesses foreign citizens' skills to express various communicative intentions in the writing form using correct words and phrases, to understand different types of written information in Russian, to comprehend information in Russian given aurally, to participate in dialogues and to produce the monologue according to the proposed subject.