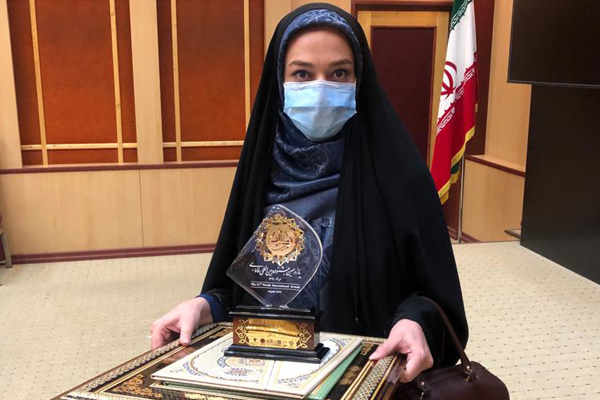 Fatemeh Fathpour, a PhD graduate of SBU, won the title of “Selected Researcher” at the 11th Farabi International Award in the field of law and at the youth level.

Dr. Fatemeh Fathpour won the title of the third selected researcher in the field of law at the youth level by presenting her dissertation entitled “Counterterrorism in the Light of Human Security Doctrine.”

Introducing her doctoral dissertation, Dr. Fathpour called terrorism a complex crime full of paradoxes, which is influenced by various economic, political, social, cultural and historical factors, and said: "Countering this complex crime has been followed through various measures in the form of "law enforcement" and "military and coercive" general approach. According to the research hypothesis, the “human security doctrine" has features that outline a correct and effective procedure and process for combating terrorism within the framework of the international legal system. The first section of the dissertation analyzes and evaluates terrorism and the causes of inefficiency of current approaches while proving the rejection of repressive and coercive fight against terrorism. The second section explains the characteristics of effective counter-terrorism by enumerating the features and characteristics of the human security doctrine. The third section presents a new model for effective and efficient confrontation with terrorism within the framework of this doctrine, considering the nature of terrorism and at the same time the weaknesses and neglected aspects in the current approaches.”

Fatemeh Fathpour, who was born in 1986 in Shiraz, with reference to her educational background, stated: “I started my education at the undergraduate level in the field of law in 2007 and graduated from the PhD program of international law of SBU. I defended my dissertation titled “Counterterrorism in the Light of Human Security Doctrine" with excellent degree. I am currently teaching at the Islamic Azad University and I am also active in research and consulting in the field of international law.