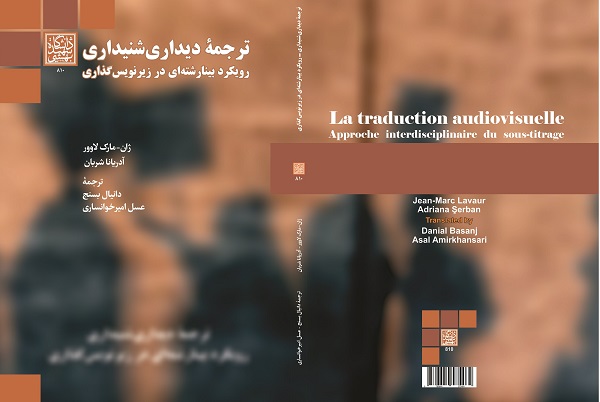 The book "La traduction audiovisuelle: Approche interdisciplinaire du sous-titrage" (Audiovisual Translation: An Interdisciplinary Approach to Subtitling) translated into Persian by Dr. Danial Basanj, assistant professor of the Faculty of Letters and Human Sciences of SBU, and Asal Amirkhansari has been published recently by SBU Press in 216 pages.

The book is originally authored in French by Jean-Marc Lavaur and Adriana Şerban in 2008.

Audiovisual translation is not a new phenomenon or activity. It dates back to silent film intertitling in the early twentieth century. Since the 20s of this century, with the advent of the first commercial feature films, dubbing and subtitling have become especially important. However, in the field of translation studies, audiovisual translation has found a place for less than thirty years.

In the last five years, there has been a constant and rapid need for audio-visual translation in its various forms, with the increasing and global expansion of Internet film and series screening platforms, as a technology-dependent socio-artistic phenomenon, followed by users' access to an ocean of audio-visual facilities.

The present book is one of the most up-to-date academic contributions in the field of audio-visual translation in France. The purpose of the book is to introduce audio-visual translation, especially subtitling, and to show its various dimensions. For this purpose, each section of the book uses the opinions of experts in various fields such as cinema, translation, linguistics and cognitive psychology. This book, in the first step, introduces and describes the emergence of subtitles in cinema and television, the technical aspects of screen subtitling and various types of subtitles in the digital age, and then addresses the linguistic and cultural challenges that arise when translating an audio-visual text into another language.

The book is aimed at professors, students, and researchers in the fields of translation studies, foreign languages, cinema, and television, as well as the general audience of audiovisual media.