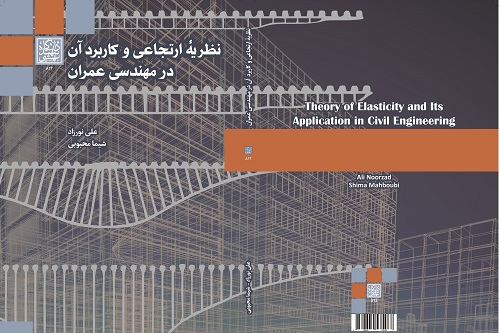 The book "Theory of Elasticity and its Application in Civil Engineering", authored by Dr. Ali Nourzad, associate professor of the Faculty of Civil, Water and Environmental Engineering of SBU, and Shima Mahboubi, PhD graduate of SBU has been published recently by SBU Press in 222 pages.

Elasticity theory is one of the most important topics in physics. This theory, which was first developed in the 19th century, determines how stress, strain and displacement are distributed under external forces in elastic solid bodies. Using common hypotheses such as linear behavior and small deformations, this theory provides a mathematical model to solve many problems in engineering fields. For example, in civil engineering, elasticity theory is widely used to analyze the stress and deformations of structures such as bars, beams, plates, and tops, and in geomechanics, it is used to determine the stresses of materials such as soil, stone, concrete, and asphalt. The elasticity theory also provides a basis for investigating the behavior of inelastic materials such as paste and viscoelastic materials.

The first chapter of the book is dedicated to the introduction of numerical, vector and tensor fields in the Cartesian coordinate system. The second chapter describes elastic structural equations, stress and strain transformation relations. The third chapter is specific to the problems of plane stress and plane strain, as well as the theory of virtual work and Castigliano's method and Airy's stress function. The fourth chapter covers Saint-Venant's principle, the principle of superposition and polynomial solution. The fifth chapter includes two-dimensional problems in the polar coordinate system, symmetry of stress distribution around an axis, and kinematic concepts. The sixth chapter is dedicated to two-dimensional problems in polar coordinates, such as the bending of a rod under a force and a sharp edge load. The seventh chapter introduces applied stress vectors and functions such as Galerkin vector, Love vector, and Maxwell and Moreira stress functions. The eighth chapter is dedicated to the twisting of sections with different shapes and geometries. Finally, the ninth chapter presents the relations of the wave equation.