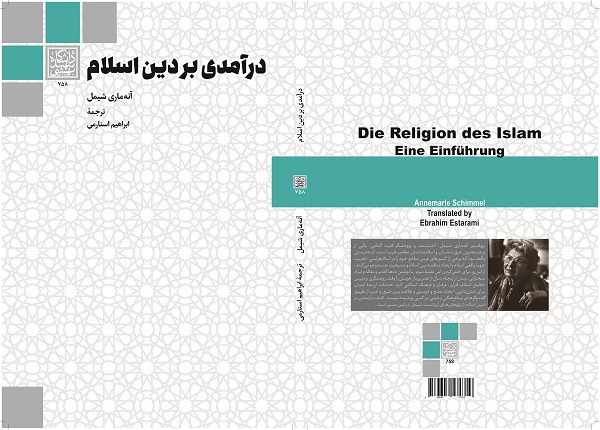 The book "Die Religion des Islam", translated by Dr. Ebrahim Estarami, assistant professor of the Faculty of Letters and Human Sciences of SBU has been published recently by SBU Press in 214 pages. This book was authored by Annemarie Shimmel.

Professor Annemarie Shimmel is undoubtedly one of the most prominent non-Muslim Western orientalists and Islamologists the world has ever seen. Shimmel’s devotion to the Prophet of Islam (PBUH), Islam, Islamic mysticism, the Holy Quran, Muslims, Iranians, Persian literature, Rumi and Islamic mysticism, Islamic culture, and the greats of the Orient is obvious to anyone. This devotion can be discerned from her works, including “And Muhammad Is His Messenger”, “Islam: An Introduction”,  “Mystical Dimensions of Islam”, “Deciphering the Signs of God”,  “I Am Wind, You Are Fire”, as well as her books on Islam in India, Sir Muhammad Iqbal and dozens of articles, speeches and interviews in praise of Islam and Muslims. Shimmel devoted more than fifty years of her life to introducing the Qur'an, the religion of Islam and Muslims in the West in order to correct the distorted face of Islam and to reveal its true image.

Shimmel's reason for publishing so many valuable works in Europe on the subject of Islam, Islamic culture, and Iran stems from the fact that he was concerned about the unrealistic face of Islam in Western countries, in addition to her interest in Iranian culture and literature.

Shimmel had been interested in Islam, Islamic culture, and the Orient since her teenagehood because of her familiarity with Arabic. Therefore, in addition to Arabic, he learned Turkish, Persian, Urdu and Hindi. Shimmel's interest in Oriental culture deepened with her visit to Islamic countries. He traveled to Turkey in 1950, where he became more familiar with Islamic mysticism. He traveled to Tehran several times and after traveling to other cities in Iran, including Mashhad, Shiraz and Isfahan, became closely acquainted with Iranian culture. He had great respect for Hafez. Shimmel eagerly traveled to Shiraz in 1995 to visit Hafez's tomb, and said of her devotion to this famous Iranian poet and the Persian language: This is the great poet who not only influenced Goethe, but anyone who loves Persian considers his poems a beautiful example of wisdom. Another important feature of Professor Shimmel was her great interest in mysticism. Therefore, Rumi and Iqbal Lahori were her favorite characters, and she was very interested in Islamic mystical poems, especially Rumi's poems.

The present book discusses topics such as the study of Islam from the perspective of the West, the pre-Islamic Arabian Peninsula, the Prophet Muhammad (PBUH), the spread of Islam, the Qur'an and its teachings, tradition, religious law, theology and philosophy, Shiism and the nature of religious sects, mysticism and the nature of Religious sects, praise of saints, and new developments in Islam.